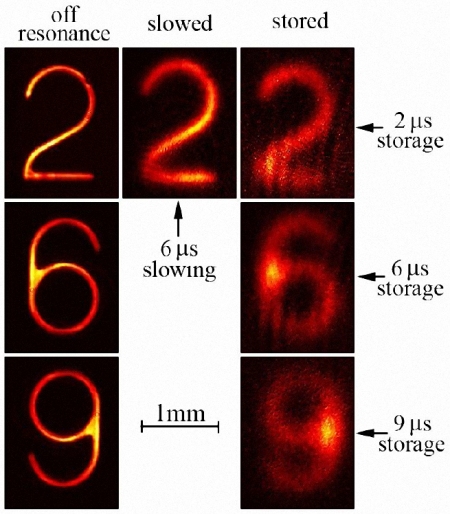 
Nir Davidson and colleagues from the Weizmann Institute of Science and the Technion-Israel Institute of Technology demonstrate how the images “2”, “6” and “9” appear before (left column) and after (right column) they have been stored in an atomic gas. For the image “2”, they also show how images can be slowed in an atomic gas (centre column) simply by exploiting the dispersive nature of the medium. The blurring of the images, which is a result of atomic diffusion, can be reduced by employing a “phase-shift” technique. (Credit: Nir Davidson group)


Atoms store 2D images for record time
Physicists in Israel have shown that 2D images of light can be shone into an atomic gas, stored there and then retrieved up to 9 µs later. Although this is not the first time this has been done, the delay is almost a thousand times longer than the previous record, and the researchers are already pioneering a technique to extend the delay even further (arXiv.org:quant-ph/0707.3707).

Normally, if a “probe” laser beam is shone onto a gas of atoms at such a frequency to make the atoms jump into a higher energy state, the light will be absorbed by the atoms and then re-emitted in different directions when the atoms return to the ground state. But if a second “pump” laser beam that is tuned to a different excited energy state is shone onto the atoms at the same time, the probe beam passes through the atom cloud unimpeded — an effect known as electromagnetically-induced transparency (EIT).

In 2001, researchers found that if the pump beam is turned off momentarily while the probe beam is in the gas, the probe beam could remain stored there until the pump beam is turned back on again. Now, Nir Davidson and colleagues from the Weizmann Institute of Science and the Technion-Israel Institute of Technology have shown that EIT can also be used to store and retrieve a 2D image.

The group starts by splitting the light from a diode laser in two beams — the probe and pump — polarized at 90° to each other, and then sends the beams to a cell of vaporized, room-temperature rubidium-87 atoms. However, the path of the probe beam is interrupted by a 2D mask, which effectively “imprints” its image onto the atoms by limiting those that are excited into higher energy states.

Just as the probe beam begins to leave the gas of atoms, the group switches off the pump beam, and then switches it on again some time later. They then direct any light leaving the gas to a CCD camera after filtering off the pump light using a polarizer.

Experimenting with masks depicting the numbers “2”, “6” and “9”, Davidson and colleagues found they could store the images in the gas for up to 9 µs and still pick them up on the camera — almost three orders of magnitude longer than a US group demonstrated earlier this year using a different technique. This, they say, is the longest that an image could be stored before the diffusion of atoms would make the image indecipherable.

To overcome this limitation, the group tried borrowing a technique from semiconductor manufacturing called phase-shift lithography, which is used to etch high-resolution features without any spreading due to refraction. In image storing, flipping the phase of the light between different parts of the image causes neighbouring features of the image to cancel-out, thus making the image “immune” to atomic diffusion.

Using this phase-shifting technique, Davidson and colleagues could store images of three lines separated by 340 µm and still resolve them after they were retrieved on the camera 30 µs later.

The Israel group now want to try changing the shape of the probe-beam light field from a simple bell-shaped “Gaussian” curve to something more elaborate, which would mean 3D information — something akin to a movie — could be stored. According to the researchers, this system would also have enough capacity to be used as a memory device for photon states used in quantum computing. // physicsworld.com
Добавил